If you like the "Hey Wordy!" episodes on PBS, you will also enjoy this DVD and audio CD program. Subtitled “Celebrate the World!”, it is presented in that same fun-via-song format. These original, animated and fully-orchestrated songs are professionally created, imaginative and engaging. You’ll enjoy hearing your young ones replay and sing these repeatedly. In just a few moments, I found myself singing right along. Serving as an exposure to other languages rather than pure instruction, the songs introduce some basic words (mostly nouns and short phrases) in 6 different languages: French (2 songs), Italian, Japanese, Chinese, Korean, and Arabic.

The Hey Wordy! DVD includes a bonus episode, celebrating Cloudy’s birthday in multiple languages. The remaining DVD components introduce mini episodes. The vibe reminds me of the “Blues Clues” series my children once enjoyed: fast-paced, educational, significant amount of lyric repetition, and exaggerated accents, facial and body expressions--no matter the language or accent. It is typical, for example, to see David Burke as Dabblebee become a French man wearing a beret or a Japanese man in kimono and sandals. Dabblebee is accompanied in his adventures by animated creatures: Wordy (the talking book who adds new vocabulary to his inside pages), Cloudy, the bird who delivers the words, and others. While a large percentage of the lyrics is in English (providing some great exposure to English vocabulary for your preschoolers), listeners will be introduced to some specific vocabulary: for example, how to greet someone in French, count in Korean, or cockadoodle doo in other languages. The Soundtrack CD plays the same songs (with a wee bit of introduction) from the DVD, while adding instrumental versions of Bonjour, Makes Me Felice, and The Best Umniah. Parents’ Choice recommended. ~ Ruth 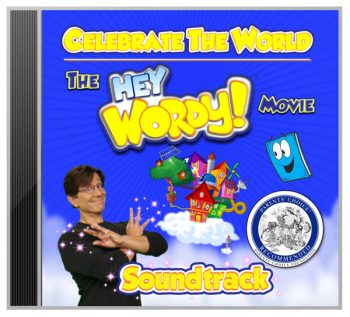 This is Rainbow Resource Center’s promise to you: We will not sell, rent, or give your personal information to any other organization. All information is secure inside of Rainbow. All credit card and check information is automatically deleted off of our systems once payment has been received.

By browsing this site you accept cookies used to improve and personalize our services and marketing.
Read our updated privacy policy for more about what we do with your data, as well as your rights and choices - including how to manage cookies.